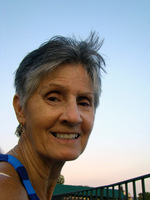 Ruth Kithrene "Kit" Hendrickson, of Pineville, KY, went home to be with the Lord surrounded by her family on December 21st, 2020 after a long battle with Alzheimer's. She was born in Pineville, KY, on April 29th, 1937.

In the 83 years Kit was blessed to spend on this Earth she had two great loves; an unyielding love for her Lord and Savior Jesus Christ and an overwhelming love for her family.

A Christian since childhood, Kit was a faithful member of Binghamtown Baptist Church. She could be found there anytime the church doors were open singing along from her pew. During her battle with Alzheimer's, while losing the ability to communicate, she continued singing hymns praising her Lord. In the middle of a song, she’d speak clearly of God’s love thanking the Lord for the promise of a new heavenly body. She’s now received her new healthy body and is singing in a strong, clear voice while rejoicing with Jesus and her heavenly family!

To her family, Kit was an inspiration for many reasons but first among them was her unconditional and sacrificial love of family. This love for family knew no bounds and set an incredible example to future generations as to what it truly meant to put the needs of others ahead of your own (Matthew 25:40). She devoted so much of herself to her family that each of us knew we could always depend on "the Kit" for any need. No matter the fun filled activity or caretaker's chore, she drew immense strength and joy from being with, and doing for, her family.

The family wishes to extend a special "thank you" to each of Miss Kit’s blessed caregivers at the Middleboro Health Care, to each neighbor that helped the family when she was at home, and to Deanna Carter for sitting so lovingly with her.